I always thought that for the conservatives a smart approach to carbon reduction would be efficiency. We spend a very significant percentage of our limited money (both corporations and individuals) on heating, cooling and transportation as well as electricity generation and transmission. Focus on increasing efficiency in these areas and we'll have more money available to spend on other things (and our companies will be more competitive internationally) and as a bi-product we'll decrease our energy usage and therefore emissions. Win all around.

Altair said:
The problem is people thinking that these are mutually exclusive.

There are green folk, heck, the green party,who want oil to be dead.

And there is another side that believes that nothing at all should be done in regards to emissions.

Meanwhile, ask the average reasonable person and they can realize that there will always be a future for petroleum and petroleum byproducts, but there doesn't need to a an overabundance.

There will always be a need for oil, and that's fine, the planet can deal with excess carbon. Just not at the levels we are currently subjecting it to.
Click to expand...

The problem is that some people believe that solar and wind power fed onto the grid is a sound basis for wholesale elimination of petroleum.

The problem is that some people believe that solar and wind power fed onto the grid is a sound basis for wholesale elimination of petroleum.
Click to expand...

There is too much noise happening on the extremes of both sides of the issue.

I think Canadians on a whole know that you can chew gum and walk at the same time, but the activists are sucking up a lot of the attention and making it seem like there are more of them than there actually are.

The greens have 3 seats.

The climate change deniers use the same old tired arguments that were created to sow doubt about climate change.
Click to expand...

Stipulating that "deniers" are people who absolutely deny change (which means they must believe climate is a static system) or who absolutely deny any human involvement, just ignore them and move on. Their dismissal does not extend to other critics. Hammering away at the weakest - manifestly vacuous - arguments and arguers is no useful work at all.

The problem is that anyone who disagrees with the orthodoxy is labeled a denier. You can't even examine parts of the problem as "the science is settled", notwithstanding that the more we examine a problem, the more the science changes.

The prerequisite for reducing fossil fuel usage is to increase electrification - not by an equivalent amount necessarily, since improving technology will deliver ways to move larger masses with fewer ergs and changing societies may reduce the distances masses have to be moved - but nevertheless by massive amounts. Anyone qualitatively arguing about this or that as replacements without considering the simplest arithmetic - how much energy we produce, and where it comes from, and how much we could reasonably expect to expand difference sources - is not making a useful argument. To be clear: saying we should move to bio, wind, solar, tidal, etc without looking at current and near-future projected numbers is pointless posturing.

Sure, another argument can be made that energy usage could be decreased massively, but that is a pipe dream, and more importantly, egregiously inhumane. It likely condemns billions of people to misery and poverty and war over resources, and most people will reject the solution unless forced by tyrannical government. And then there will be a revolution, the tyrants will be overthrown, and we'll be starting over burning wood and whale oil for heat and light and cooking.
Y

If we eliminated burning fossil fuels then the price of plastics, fertilizer and other non-combustible oil extracts would go through the roof. It is the distillation and sale of fuel oils that makes plastics affordable. there just isn't enough 'plastic' in oil to make it viable otherwise. To replace our current electricity source with nuclear would require the construction of literally thousands of reactors globally. There are currently fewer than 600 operational globally. Such a process would require the current third world to remain in poverty for dozens of years. Building wind or solar is likewise a pipe dream and, except in limited places, a total waste of resources especially since they require a fossil-fuel backup to be brought on line at the same time, and should be stopped immediately. Run the numbers. According to Forbes the US would require 1.46 million turbines or the solar equivalent to come down off the use of fossil fuels. That means installing almost 50,000 per year every year until 2050. Obviously there will be other sources of energy besides wind but each windmill has to be totally replaced every approx. 20 years so your requiements are going to be closer to 75,000 than 50 and all to achieve what? The cost is not worth even starting such a project. If the green folks were serious about the risks of climate change and fuel burning they would be imposing target reductions on the globes' greatest carbon producers: India and China. They manifestly are not. Instead they pick on countries such as Australia and Canada who collectively produce less than 3% of the total carbon output. Although I cannot recall the source, I believe that the carbon sequestering by our forests at least equals, if not exceeds our carbon output.
R

SeaKingTacco said:
I quoted what you said and then you went back and added a much more conciliatory second para.

You did not answer my question. Be honest.
Click to expand...

I actually edited right after I posted. You responded just before I posted. I was honest. I thought I did answer.

Remius said:
I actually edited right after I posted. You responded just before I posted. I was honest. I thought I did answer.
Click to expand...

A new poll suggests Canadians are mostly giving a collective shrug to the latest federal budget, which has also barely affected the Liberals’ chances of winning the next election.

The Ipsos poll conducted exclusively for Global News found 62 per cent of Canadians who responded didn’t have a positive or negative opinion of the budget. An equal number of those surveyed — 19 per cent — gave the budget a thumbs up or a thumbs down.

Those opinions are an improvement over Canadians’ response to the last federal budget in 2019, which Ipsos found at the time was supported by just 11 per cent of those polled, compared to one in four who said it didn’t deliver. 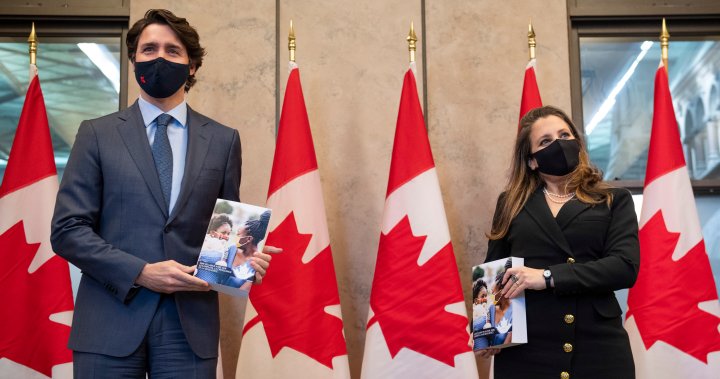 The Ipsos poll conducted exclusively for Global News found 62 per cent of Canadians who responded didn't have a positive or negative opinion of the budget.

It's a party-out-of-big-ideas budget: mainly a lot of small stuff. As an effective application of the principle that support for each niche of public funding tends to be narrow and intense, while opposition might be broad but is lethargic, it's just vote-buying.

The important message it delivered is that the government does not actually believe in a climate emergency. It is not a budget designed to mobilize the country's resources to fight a crisis.
You must log in or register to reply here.